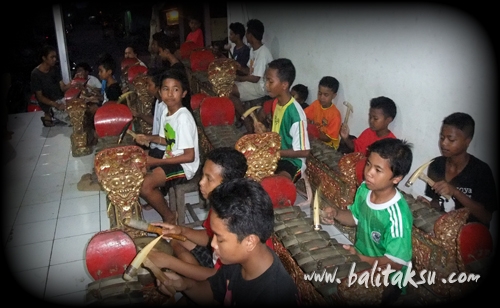 The boys had been trained before the odalan, and almost every day they rehearsed and sometimes up to 4 hours. They rehearsed the instrumental Gilak and the gamelan accompaniment of Rejang Dewa dance.

The gamelan teacher were I Made Putra Wijaya and Gareng Maha Laksana. They had been teaching the children earlier before. They taught a kind of Balinese marching band called “Baleganjur“. In the odalan at this time they would performing gamelan, about this plan f was given an opportunity in helping to train these children. Some model of interlocking parts of gamelan songs (kotekan) were simplified in order made it easy to learn and to master the song. 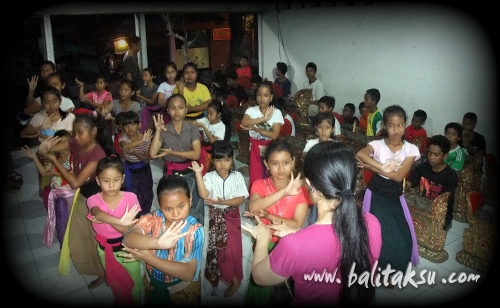 general rehearsal of all children dancers and gamelan musicians

It looked that they enjoyed very much their performance. Cheers for a good work! 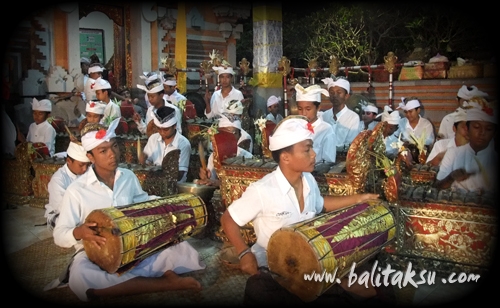 performing ngayah at Temple of the Banjar 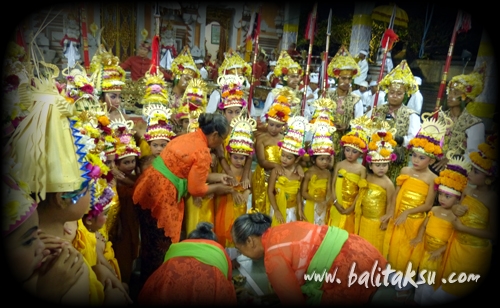 Rejang Dewa is a sacred dance that usually performs during the temple ceremony procession. This dance normally danced by the very young girls who have not been yet menstruating.

The costume of the Rejang Dewa dance is very typical a white-yellow nuanced and wear a head dresses or Gelungan made of young coconut leaves decorated with flowers. The dancers also wearing a shawl that in some of its movements dancing it in circle formation, this is also has the meaning to cleanse the place