Maybe you’ve heard the name “Legong.” If you read from a Bali Guide Book it is said that Legong is a Balinese classical dance that already existed since long time ago. 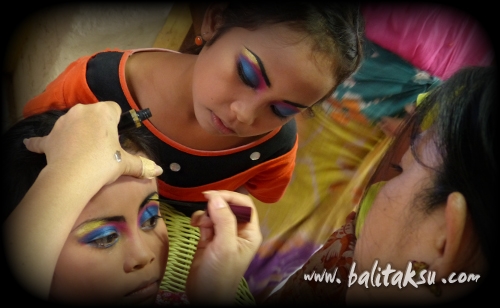 Some days ago, here in our community, Banjar Kalah Peliatan, Ubud, there was a temple ceremony or odalan at Pura Catur Bhuana Banjar Kalah. For this we have set up Legong Lasem dance and Legong Kupu-kupu Tarum to perform ngayah in this temple. 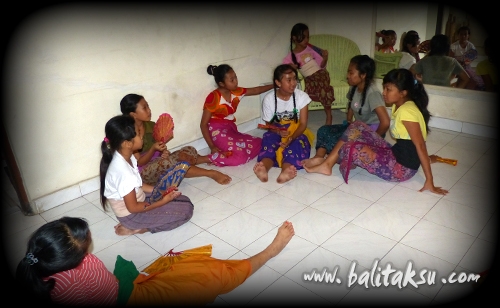 For the odalan of the temple at this time, the children were trained Legong Lasem, Legong Kupu-kupu Tarum (Legong of Butterflies), and some other classical dances. Two very young girls of Tunas Maragawi from primary school children were selected to dance the Legong Lasem. One would be as the Condong and the other as the Garuda. 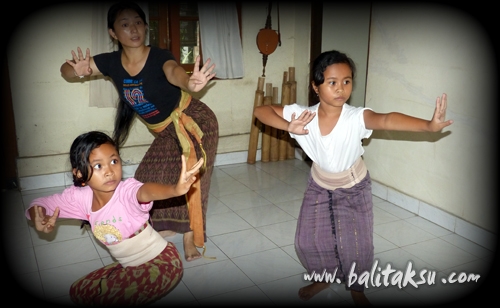 Before the ceremony, they rehearsed almost every day at f studio. The longer their rehearsal, their dance was much much getting better, both were very good, m was difficult to decided who would be as the Condong or Garuda. Finally she decided that both of them would dancing Condong, and the one who would still strong enough would also dancing the Garuda.

Wow! These girls were so energetic, great expression – the smile, eyes, m was surprised!

Finally, on 28 September 2013, when odalan at temple of Banjar Kalah, the girls – Yanti (2nd grade primary school children), and Gek Ira (3rd grade primary school children), successfully ngayah performed this dance on stage for their first time. The audiences, the people of Banjar Kalah looked so happy, and they gave their great appreciation to these wonderful little dancers.

Salute for these little dancers, the next generation of the Condong Legong Lasem dance from Banjar Kalah Peliatan. Cheers for the good work, and for the future of Balinese dances! 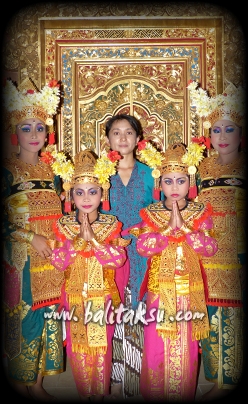 The Story of Legong Lasem

m got this story version from her dance teacher, as a form of tribute to her teacher. Sorry, perhaps there might be difference versions of the story in some other areas in Bali.

There was a king named Prabu Lasem, when he toured on his own land he met a beautiful princess who was hanging around the forest. She was Rangkesari, the princess of a royal Daha Kingdom . King Lasem fell in love with Rangkesari. He also proposed her and took her straight to his palace. Rangkesari refused him because she was already engaged to Prabu Kahuripan.

Rangkesari kept continued to refuse Lasem’s propose. Finally Lasem angered and declared war to the King of Daha. Rangkesari’s brother who was the King of Daha kingdom ready to wage war against the King Lasem.

When ahead to the war Lasem was attacked by a crow (in the dance roles as the Garuda bird) and tried to stop him. It was sign of a bad omen. However Lasem ignored this warning and he kept still go to war.

In the short version of the the Legong Lasem dance, the story is told through here. If in the complete version of Legong Lasem (which danced almost for an hour duration) there are still more stories like the Patih helped preparing war clothes and a horse for King Lasem, but the horse fell down on the way (before the Garuda come) which also means a bad omen for Lasem but Lasem was still want to fight.