The “umbul-umbul” is a banner common in Balinese Hinduism, five to ten meters long by about 80 centimeters wide, painted with a decorative dragon. It is often seen in temples and in processions. 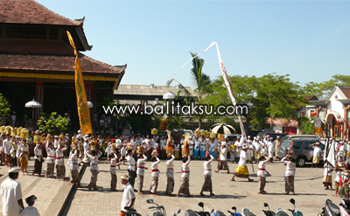 Its production is a social responsibility, “ngayah,” unpaid and non-commercial, fully dedicated to the society and to God. On this occasion I Ketut Madra, a painter in the traditional style from Banjar Kalah, Peliatan, was asked to paint an umbul-umbul to be placed in the temple and used at any ritual or ceremony.

Traditional painting is very difficult, and it needs special talent and long-practiced discipline. My wife ( m :mayumi inouye) and I ( f :kadek ferry) are not painters, nor are we familiar with paintbrushes, colors, or canvas, but Ketut Madra said to us, “Let’s ngayah.” So, in accordance with the spirit of “ngayah,” we tried to help, even to paint—at least to do something useful in producing this umbul-umbul in the limited time available. Together with Ketut himself and his brother Madri, we worked intensively for two weeks, eight hours a day, to finish the job. It was well done, two umbul-umbuls, and we felt very satisfied with our job and the results. 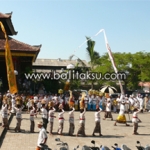 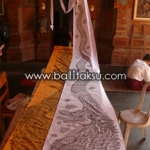 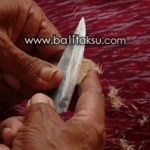 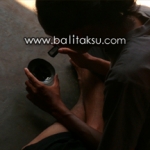 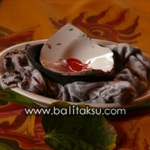 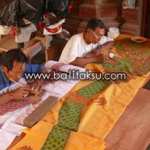 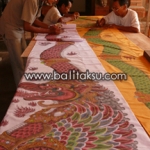 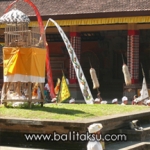 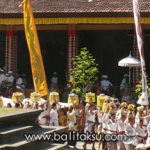 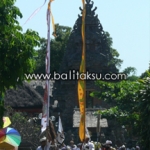 The purpose of the umbul-umbul, based on a publication of the Parisada Hindu Dharma Indonesia, or PHDI (the National Hindu Institution), is to remind viewers that human beings should not be living in vain, and it is drawn from a story of Arjuna and Hanoman from the great epic, the Mahabharata.

King Yudistira wants his kingdom to be very beautiful, and he asks his brother Arjuna to go to Alengka, the island country where the demon Rahwana was king and where Sita, Rama’s wife, had lived as a captive after having been kidnapped by Rahwana. Arjuna asks Krishna to help him reach this kingdom. When he arrives at the seashore, Krishna sees a long, strong, and steady bridge for crossing the sea. It reminds him of the time when he had been born as Rama, and of the loyalty of Hanoman, the heroic white monkey, since Hanoman and his monkey-soldiers had built this bridge to help Rama in the invasion of Alengka and the recovery of Sita.

Meanwhile, while Hanoman is meditating, he has similar memories, and so he goes to visit Krishna. When he arrives, Arjuna tells Krishna that he doesn’t believe Hanoman is so powerful. He wants to show that he can also build a steady bridge, but only in a moment, not the few days that Hanoman and all his monkeys needed. Arjuna says, moreover, that if he can’t build a steady bridge in a moment, he will pray to Hanoman. Then he shoots his dragon arrow, which changes into a similar long bridge. But Hanoman jumps onto the bridge, which suddenly collapses. Then Krishna shoots his arrow directly at Arjuna’s bridge, which is immediately rebuilt. Once again Hanoman jumps onto the bridge, but it remains steady. So Hanoman recognizes that Krishna is (was) his king, Rama, reincarnated as Krishna, and he prays to him. Arjuna want to pray to Hanoman as he promised, but Hanoman says, “You should not pray to me—humans should not pray to animals, and I am still a monkey.” But Arjuna keeps praying to Hanoman, and Hanoman keeps rejecting the prayer.

Seeing this contention, Krishna advises Arjuna that he should not act in vain, that Arjuna is the most powerful. He also says that nobody is so powerful as the God Hyang Widhi, and that therefore Arjuna should pray to Hyang Widi. Krishna finally curses the bridge, which suddenly changes to an umbul-umbul, and gives humans the message not to act vainly, as Arjuna had been doing. This is why these umbul-umbuls can often be found in temples, painted with the decorative dragon representing Arjuna’s arrow, and sometimes as well as flags painted with Hanoman—symbols to remind all people of the story of Arjuna and Hanoman.

Thanks to our friend (advisor) Mr.Rodney Merrill, U.S.A.