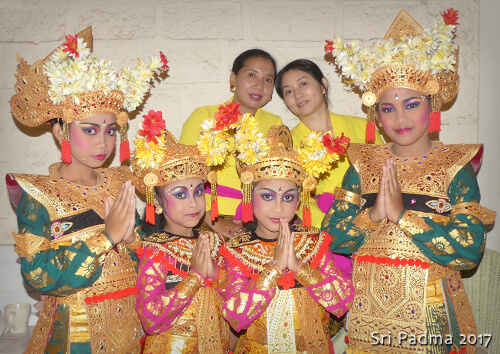 We just had our performance last night at Pura Desa & Puseh Peliatan Village, and this evening also we also performed on temple festival at Pura Catur Bhuana Banjar Kalah Peliatan, a community temple where we live.

This evening one of our student a little girl did her debut performance. It was a Condong dance.

There were some parts of Garuda dance movement that she had not memorized yet, so another Condong dancer joined this part so the role of Condong were danced by two dancers. But she danced it nice!! And She did it! Beautiful!

The gamelan group who accompanied this performance was a youth gamelan orchestra that taught by f since some weeks before. In this group f taught the gamelan accompaniment of the Legong Lasem dance. 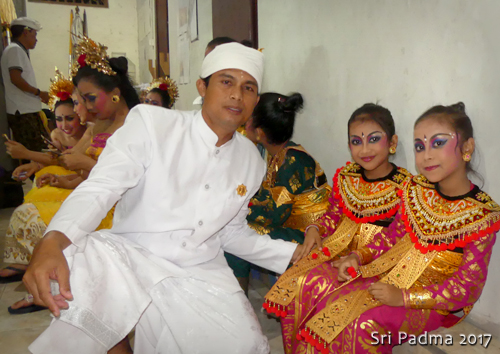 “Hmm? Which is my niece? You two are so beautiful!!”
(This priest, Jero Mangku Pura Bayung was one of the dancer’s relative. He came to the back stage to see her)

They have the similar aura. Don’t they?!
During special training, I always train simultaneously to two children and will always try to raise new generations of Legong dancers.

This time, on this Odalan festival many of our students didn’t get their opportunity to dance due to some dance program changes. Besides they actually had long enough time to practice and to prepare this.
But anyway, we will make more efforts to become more steadfast and always try to do better for the preservation and the future of Balinese dance!