The idea of making this Legong dance had been planned since October 2016. In the month of Purnama (full moon) on March 2017, we started the creating process with the Nuasen ceremony at Pura Gunung Sari temple, along with Jero Mangku Lingsir, Jero Mangku Alit, Jero Mangku Istri, and also attended by dancers and gamelan musicians. 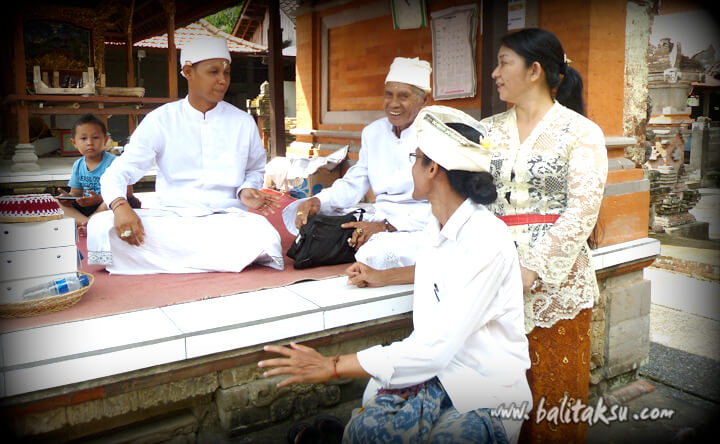 Pura Masceti Gunung Sari is a Subak temple, a main temple of the organization of water irrigation management system, but it is also known as the temple for Balinese artist to pray in dedication to the God of Performing Art “Ida Betara Ratu Panji.”

In the session of the Nuasen ceremonies we played some part of the gamelan melodies of the Legong Sri Padma, with some gamelan instruments that we brought to the temple. This gamelan melody composition was played along with its dance, as a form of our sincerity to started to created a new work of Legong Dance, in the hope of being blessed in every process.

Some years before, we had also created a new creation Dance, a welcome dance where f (kadek ferry) arranged the gamelan accompaniment and m (mayumi inouye) created the choreography. But this time was a different, a Legong dance, a new challenge for us. There were many things need to be considered in producing this Legong dance. The gamelan accompaniment, the choreography, the rules and the structures. We had decided that this Legong Sri Padma would still use the classical Legong structure. Some of the structures were the Pepeson Condong, Pengawak, Pengecet, Siyat, Pekaad, and some transitions.
Legong Sri Padma, although was classified as a new Legong dance but we still retained the classical elements of the classical Legong dance.

It took quite long time to produce and created this Legong but we really appreciated the process in order to get a better harmonization between the gamelan accompaniment and the dance choreography. 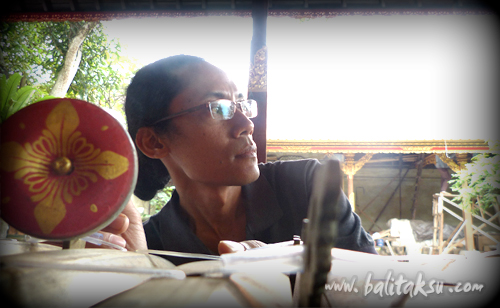 After creating the main melody or main song, the next is to create the Kotekan (interlocking part) 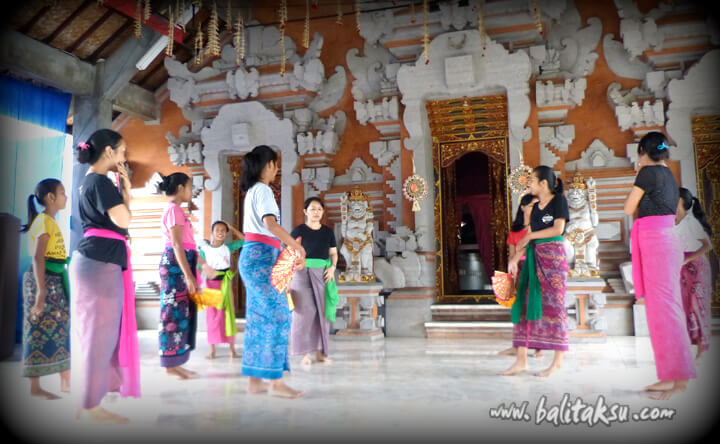 m (mayumi inouye) rehearsed with the dancers of Legong Sri Padma, her students.
Not only at f studio, the dance rehearsal also conducted at the Bale Banjar Kalah for a larger stage area

The choreography of the Legong Sri Padma was by m (mayumi inouye). She was also one of the dancer along with her 8 students from Sanggar Sri Padma. The gamelan composition by f (kadek ferry), with a gamelan group accompaniment from Sekaa Gong Semara Pegulingan Dewi Sri Peliatan.

The members of the gamelan group Semara Pegulingan Dewi Sri were those senior gamelan musicians (seniman werdha) of Peliatan and Teges Kanginan village. I am one of the youngest musician in this group . I really appreciated and thank to these seniors for giving me the opportunity to produce my composition ideas and played it in this Gamelan Semara Pegulingan group. 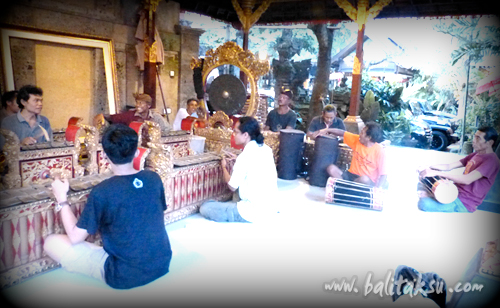 During the gamelan rehearsal

The next month, April 2017, was the month of ceremonies. Many temples have their festivals on this month, full of ceremonies, also in Pura Dalem Gede Peliatan. There was a huge ceremony called “Karya Agung Ngenteg Linggih lan Ngusabha Dalem”. Many of our musician friends and also the musician members of the group wanted to perform this Legong at Pura Dalem Gede Temple for this big ceremony. So the Legong Sri Padma choreography and its gamelan composition should had been completed sooner. Oh, it was quite hard time for us.

The weeks have passed. There were still some days left before the ceremony started, and our Legong Sri Padma did not completed yet both the choreography and its gamelan composition. But, thanks god! We were so grateful to our musician friends of their great spirit and motivation!! Finally we completed and produced this Legong just in time.

The dance choreography and gamelan accompaniment may have been completed, how about the costumes???

m (mayumi inouye) was the costume stylist of this Legong. In general, the costume of Legong Sri Padma still use a classic Legong costume, this costume concept was based on our concept that “this new Legong would still retain its classic feel.” But however we did some costume color adjustment and some modification to its fabric as well as some additional fashion elements that would describe the idea of the story of this Legong dance. 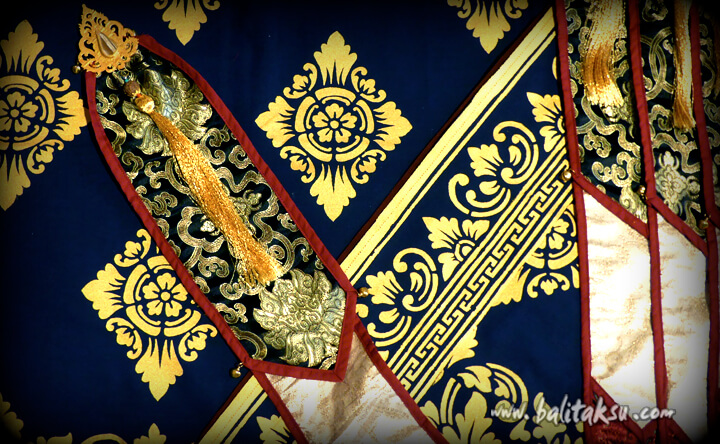 The costume of Legong Sri Padma
with a special motive design in-Prada on cloth, as well as the “oncer”

A red accent with dark blue was chosen as the basic color idea for this Legong costume. It was adapted from the Sri Padma Group Logo. This logo illustrates the “Fire of Fire in the center of the lotus” 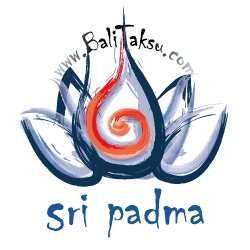 Another part of the costume like the “oncer” was also designed by m (mayumi inouye), with the selection of Japanese fabrics. It based on the story theme of this Legong which related to Japanese culture.

We were so grateful!! As a form of dedication to the temple, this Legong dance was performed for the first time Ngayah at Pura Dalem Gede Peliatan temple on April 30, 2017. 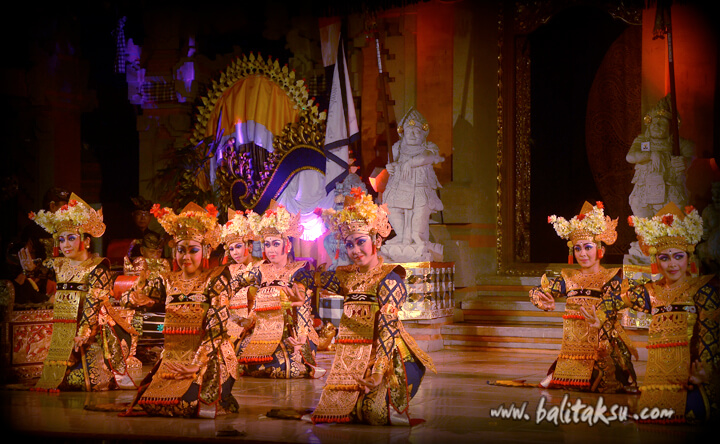 Over the time, major disturbances arise. Especially when a battle is happening, a war. This is a very difficult time for the Goddess.

When she helps someone and at the same time many other people are in dire need of help. She is very sad to see in front of her eyes that many people need her help while her hands are full. She becomes very sad and could not accept this. Sri Padma grieves over her limitations.

But her determination and compassion are still glowing. She wants to save all sentient beings. Until finally the God from the heaven witnesses and feels Sri Padma’s love and gives her the grace of “Thousand Hands” so that she can still helps the living creatures and gives them her love. 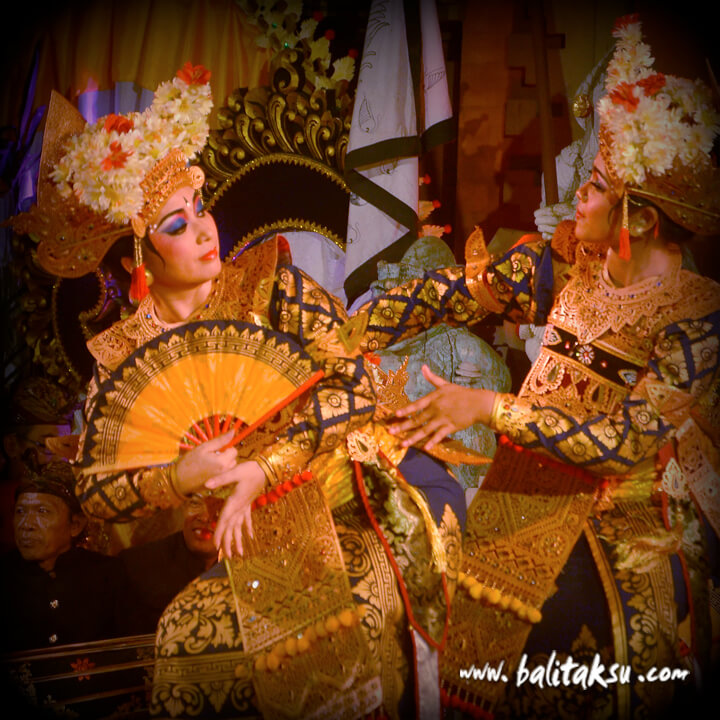