“An old gentleman from neighbor”, remind me when I was a child seeing I Made Lebah. It was in the end of 1980’s, as a child I often play at the Bale Banjar (community building) Kalah. One time when all gamelan musicians from my community doing their rehearsal, with the gamelan that they had just bought from Pande in Blahbatuh Gianyar. And while rehearsing I just seated behind the teachers, I Made Lebah and I Wayan Gandra, father and son. I had no idea what they playing, and I just enjoyed listen and watching. 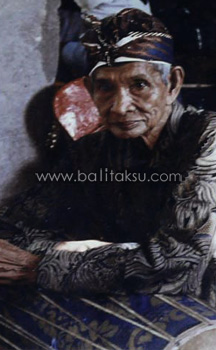 In the 1992, as I interested in Balinese gamelan, I joined a children gamelan club, Genta Bhuana Sari. As I could play the basic, sometime the community group ask me to join, and they said, “just join!”. And we play the classical instrumental works – the Peliatan Authentic Lelambatan Instrumentals, that all teach by I Made Lebah and I Wayan Gandra.

I Made Lebah also an important person of the Gunung Sari group, he was the co-leader of this Group of Agung Mandera. By all their efforts had made the Gunung Sari Peliatan became a world well known Balinese Gamelan and Dance group. Artists from Peliatan first came to international attention when its gamelan orchestra invited to perform on Paris Colonial Exhibition, in 1931. All Peliatan artists, musicians, dancers, painters, sculptures, created sensation to the European art community in that time, and made Bali becoming well-known as a beautiful and artistic place in the world.

Based on the book “Peliatan Legends; 1993” tells that after the triumph of the 1931, in 1937 the Dutch Colonial Government sponsored a gamelan competition among the best groups, held in open square Gianyar regency, Bali. The Peliatan Group under the leadership of Agung Mandera and I Made Lebah, from this competition won the first prize and endowed a plaque, a flag, and an exemption for one year of the dreaded “kerja rodi” corvée labor service on the roads!

In the 1952, again the Gunung Sari Peliatan group had special journey of the performance in Europe and America, with a British Impresario John Coast. And in 1971 the special performance in Australia with Impresario Clifford Hocking, and many other performances that influence into the development of the Balinese Dance and Gamelan.

Both from the local and center government, I Made Lebah got many awards, some of these include the “Wija Kusuma Award” from the Gianyar Regency; and in the 1993 a special award from Bali Province – Department of Cultural and Education. In the same year the center Government – Ministry of Indonesian Cultural and Education also awarded I Made Lebah as a very talented Balinese gamelan musician and teacher.

I Made Lebah, beside as great Balinese gamelan musician, for me he was also a good friend of my great grandfather. Really strong in my memories, in their very old age almost everyday in the afternoon they meet each other in the front of my house, talking, relaxing, and playing with cocks for cockfighting as my great grandfather favorite, and laughing – expressing their joys. 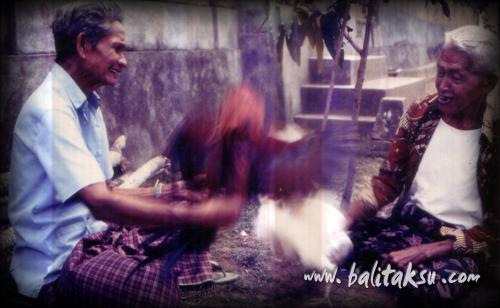