Nusa Dua Festival or Nusa Dua Fiesta is an annual festival held in a week at Peninsula, Nusa Dua, Bali. Nusa Dua Fiesta held in tourism area and its became a good tourist attraction. The festival presents a variety of activities such as tourism fairs, culinary, sports, and arts performance. Not only Balinese art but also from other provinces of Indonesia.

This time was so special, because kadek ferry ( f ) met his old friend, Agus Teja Sentosa. They were friends since elementary school. Some musicians of Genta Bhuana Sari also pleased to meet this old fella. 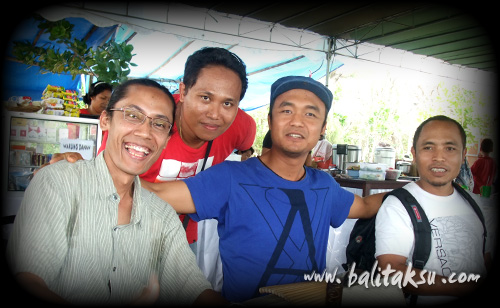 Gus Teja had been a member of Genta Bhuana Sari since its founding in 1992. At that time f and Gus Teja were living in the same Banjar, Banjar Kalah Peliatan. They along with two other friends often went together by bicycle to rehearse gamelan. Often after the rehearsal when on the way back home from the Palace, Gus Teja seated on the back of f ‘s bicycle, as well as he played his flute that he had brought from home. There was a funny story during that time. You can imagine that Gus Teja’s body was bigger and taller than f , seated on a bicycle saddle. Gus Teja seated on more than half space of the saddle on the back, and the rest was a space for f to seat and ride, and when he played the flute he put his elbows on f ‘s shoulders, hahaha. Well, there were a lot of wonderful memories.

Now in the 21 years of age of the group Genta Bhuana Sari, some of the gamelan musicians were already quite from member, and the memberships filled by some younger musicians. In past eight years Gus Teja could not actively joining the group activities because of his busy activities on his study at Institute of Arts, ISI Denpasar.

This Nusa Dua Fiesta 2013 was like a reunion with an old friend. Indeed, we would be in one stage, but this time Gus Teja performed with his own group, Gus Teja World Music, a newly group he formed some years ago. Gus Teja World Music is a famous group now, top of Bali’s music group. Many of his fans attended his performance on this closing festival at Peninsula, Nusa Dua. 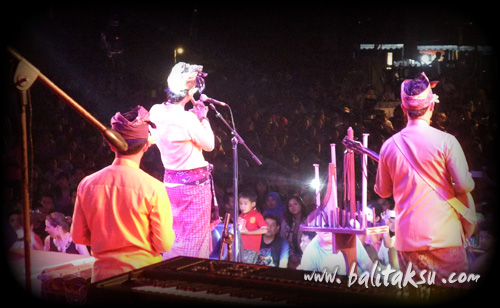 Before, f only heard Gus Teja music from a CD, but that night was the first time he watched live Gus Teja music performances, though from behind, but f greatly enjoyed the music. 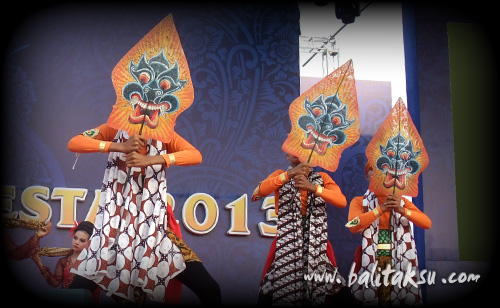 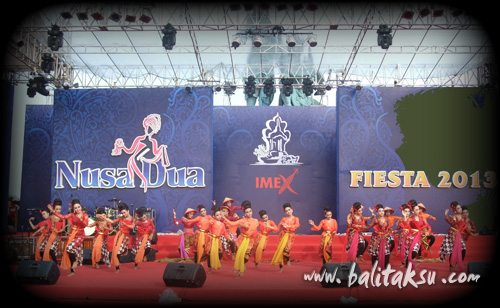 Peninsula Stage in the late afternoon, the air was still hot because it was close to the beach. But this didn’t affect to the spirit of the performers performing their beautiful dances. 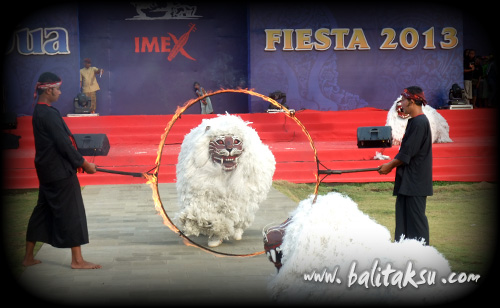 Well, especially for these white lion dancers. Of course it was very hot in it, wasn’t it?

This was one of the scenes of acrobatic white lion dance from Java. They were good at dance. All audiences were highly entertained. Among the audiences there were also many artists who would perform in the evening. Prior to their performance and before wearing their costumes, they watched the performances of the other participants. 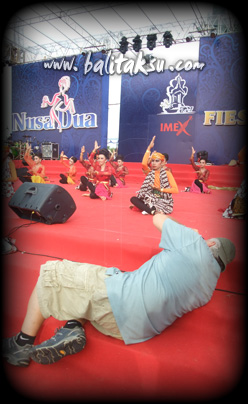 Here is an interesting photograph. This tourist looked so excited to watch and take pictures of this performance with his pocket camera. He watched all performances on that day until the end.