BVLGARI Resort Bali celebrated their 10th anniversary last October.
Unlike many big hotels in Bali which most of their celebrations in glamorous, the celebration of the 10th Anniversary Bvlgari Resort was celebrated in classic Balinese theme.
The stage, the entertainments, and also the staff and management wear traditional Balinese dress like the Songket, Endek, Bali Batik.
They were all in classical Balinese style. Beautiful! 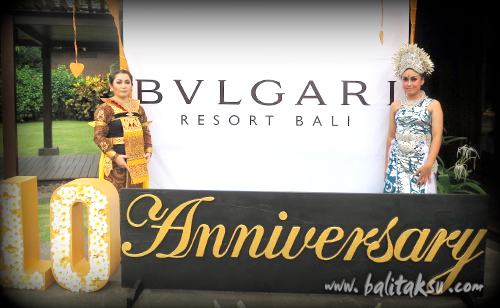 We performed welcome dance “Puspa Mekar” and Legong Kupu- Kupu Carum- Legong dance of butterflies. This was a join performance with Melati Blanca Danes studio of Ibu Melati from Denpasar.

The gamelan group who accompanied the performance was Sekaa Pelegongan Sri Padma. 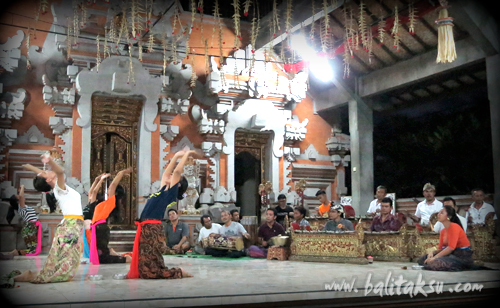 The preparation was fairly short. The Sri Padma gamelan group only practiced three times, and the one time join-rehearsal with all dancers at the Bale Banjar Kalah Peliatan.

A few days before the join-rehearsal with the dancers from sanggar Melati Danes, the gamelan rehearsals were assisted by m mayumi inouye and her students to “meadungan” (combine) the composition of songs and direct the Angsel (important parts or markers of the dance movements that are used as a reference by gamelan players to accompany it), especially the Angsel of the Legong Kupu-Kupu Carum dance.

She rehearsed as well as remembering the movements. This Legong was last performed three years ago by m ’s students of Sri Padma group for temple ceremony Odalan at Pura Catur Bhuana Banjar Kalah, Peliatan, Ubud.
Here is the performance as a result of Legong dance reconstruction in 2013 with Ibu Bulantrisna Djelantik . 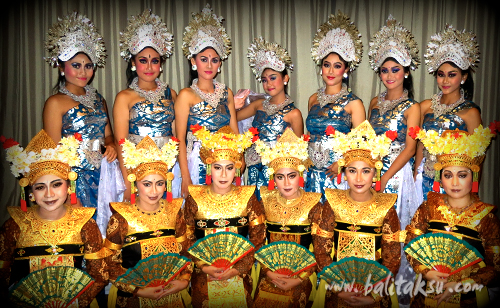 We were so grateful for Sri Padma group and Melati Danes group.
Our special thanks to Ibu Melati and to the Bvlgari Resort team who welcomed us very friendly.
Matur Suksma! 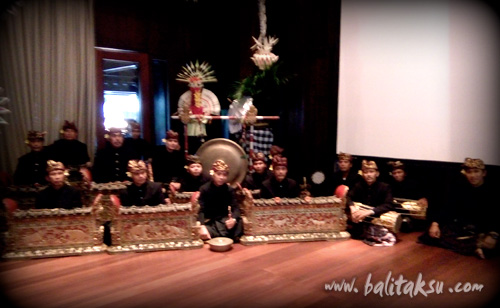