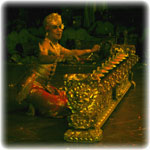 Kebyar Terompong was created by Mario.
Having no particular story, a dancer performs striking with sticks a set of 10 gong (called Terompong, a kettle-like instrument) placed on the front stage.
Thus the name of “Terompong” dance comes from the instrument itself.

Kebyar Terompong is a solo exhibition dance. The dancer sits cross-legged throughout most of the dance.

By deemphasizing the legs and decreasing the space to a small sphere, the relation between dancer and gamelan is intensified.
In Kebyar Terompong, the dancer actually joins the orchestra by playing a long instrument of circular knobbed kettles called the Terompong, as he continues to dance and twirl the Terompong sticks between his fingers.

Kebyar originated in North Bali around 1920, but the man most often credited with its creation is the late Mario, a dancer whose superb performances of Kebyar remain unparalleled.

no images were found