Probably one of the frequently performed dances in Bali,
it is staged to welcome guests of honor.
Many movements are take from ancient and sacred temple dances, but they scattaring of flowers to wands the audience clearly expresses a warm welcome. 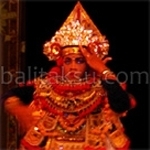 Legong is the name for kind of classical dance by 3 girls, one to enact the palace attender CONDONG, hile the other two are playing the LEGONG or the main characters of the story.
From among various stories to play this troupe presents the story tof King Lasem.
Prince of Lasem has abducted the Princess Langkesari of Daha Kingdom.
Despite his efforts, sherefuses to yield to him as the believes that ther finance.
Prince of Kahuripan, is coming to her rescue Feeling sorry for her abductor, Langkesari urges him to let ger free, but the kidnapper prefer to oppose any fight his contendernstead of releasing her.
On the way to the battle Lasem meets raven, symbol of bad omen, yet the continues on his way only to die in the battle.

There was once a nisada named Lubdaka,who lived with his family in the mountains.
His occupation was hunting various kinds of wild animals.
On the fourteenth day of the dark half of the seventh month he set out early in the morning to hunt.
He was unsuccessful, and sun set found him exhausted and far from home.
He was planning to pass the night there.
When the sun went down all nature seemes to lament.
The hunter climbed into a maja tree.
A terrible sleepiness now assailed him, and he was afraid he would go to sleep, fall from his place and be killed by a wild animal.
He therefore sought a means of staying awake:
he plucked the leaves of the maja tree and continually dropped them in the water.
But in the midst of the lake was a natural lingga of siwa, and this is where the leaves come to rest.
Because of his fear of falling he did not sleep the whole night through;
down now appeared in the sky.
Lubdaka, as he had performed the highest vow.
The reason why a mere hunter should come to siwa’s heaven was that in the adiyuga Siwa has taught the vow of the Night of Siwa, which has as a consequence that all one’s evil deeds are wiped away had one goes to Siwa’s heaven to enjoy supreme bliss.
And so Lubdaka would receive the reward, even through the observance was unintentional.