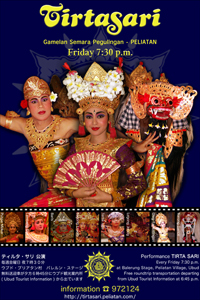 Tirta Sari was founded in 1978 at Puri Kaleran, Peliatan by the late Anak Agung Gede Mandera.
Agung Mandera is justly famous as a dancer and choreographer, and his work has shaped the development of music in Peliatan,
which has been longrenowned for the excellence of its artists and musicians.
Two of Agung Mandera’s sons now work with Tirta Sari:
A.A Gede Bagus Mandera Erawan is the artistic Director and A.A. Gd. Oka Dalem is the Leader.

Tirta Sari has toured Japan, U.S.A., and Russia, and has made many recordings. The orchestra is of a kind known as Semar Pegulingan. The sweet-sounding Semar Pegulingan instruments are tuned to a seven note scale, where as the much more common Gong Kebyar employs a five note scale.

Semar Pegulingan is the traditional and best orchestra for Legong. Legong was created in the early 19th century,when is was dances, by men wearing masks. There are many Legong dances to its reportoler with the aim of preserving and restoring this traditional genre.

The opening section of this purely instrumental work adapts music played by the four genders that accompany the Wayang Kulit (Shadow Puppet Show).

Puspa Mekar (also know as Pendet or the Welcome Dance)

In this dance, which derives from the temple, offering is made to the audience as a welcome and blessing.

This Legong is based on an event of the 12th or 13th Century.

The first character is Condong, a lady of the court. She is joined by Princed Lasem and Princess Rangkesari of Daha. The story begin when the Condong leaves. Lasem has abducted Rangkesari. She weeps.

When he pleads for her love shereject him, having tearned that her fiance. The crown prince then release her. On his way to confront the prince he encounters a bird of omen. He kills it. The subsequent defeat and death of lern is not shown in the dance.

The famous dancer, Mario from Tabananan, caused a sensation throughout Bali with this piece (and Kebyar Duduk), which he created in the 1920s. The dance incorporates the use of the instrument called teropong.

This dance is bassed on the story of two brothers, Kings Bali and Sugriwa, who were turned into monkeys.

At the beginning of the dance the two brothers, represented by the Legong, are living peacefully together.

After some time we see the two as monkeys (this has happended because of acts not show in the dance. Princess Dewi Anjani had brought a powerfull magic, and both brothers had leapt in after the magic). Since as monkey they do not know each other, they fight. Finally when neither one wins or losed, they become tired and recognize each as Bali and Sugriwa, see that they have been changed into monkey and become very sad.

In this classical drama and dance, Çiwa, who in charge for “Swarga Loka" (Swarga Loka means heaven), is being sick and need to be treated by a special remedy taken from a kind species of a plant called "Kayu Mendep"("Kayu means a tree, "mendep" means quiet), also called"Taru Pramana" ("Taru"= wood, "Pramana" = spirit)

He asks his wife, Dewi Uma, to search for the remedy. After an exhausing search assisted by her “Servants" (Bidadari) who then transform into demons called “Kelika", she is finally successful to get the remedy for Çiwa.

Semara, a God of love and passion, is a son of Siva (an Indian God of destruction and dance).

First coming on the stage are Semara and his new bride Ratih, a goddes of moon.

Ratih dancer retreats to the backstage for one moment and appears again putting on the mask of shedevil, Rangda.

Then the story begins. Once, one of Raksasa (starved,beast like giant tribes interior to man, with inborn power of demon), named Nilaludraka,

was anxious to acquire the power to control this world and was practising meditation. Sica descending onto this early wirld, was so impressed with his enthusiasm that she gave him the mighty power, which could ever be over come neither by goods nor man,

except Siva and half-animal monsters. Never experiencing any defeat, Nilaludraka continued challenging battles one after another, until there was none left in heaven and on earth any more to complete with.

All the gods were flustered.

Unfotunately, Sica was devoted to meditation at the top of Himalayas.

No one could approach him, because his wrath may turn any one to ashes at once.

Gods gathered and conceived a plain to send the son of Siva, Semara, to the Himalayas, the meditation of Siva was apparently disturbed.

With rage, Siva laid Semara, Ratih and all in ashes in a moment.

Opening his eye from meditation, Siva faced squarely to the death of his son and wife.

Lamenting for their unexpected death.

Siva scattered the ashes all over the world (thanks to this, it is said, man has love in his hearth)

Encouraged by love of Semara, Siva and his wife Parwati got achild, half-animal monster, who would conquer Nilaluraka.

Dancers putting on the masks of beauties or devils appear on the stage, and perform the battle between the virtue and the vice. A typical Balinese view of the world: “Rua Bineda" (every-thing has two sides, that is, all world is knitted together with opposing two elements),is said to have been represented in this dance.
Derived from the epic legends of ancient India, Ramayana and Mahabharata, the story has been accomplished as the present one.

The dance performed by male dancers putting on decil masks is "Jauk",and its expression is more violents and far exaggerated than that in "Baris".

A traditional dance is the first tahta boys learn. It depicts a courageous warrior preparing himself for battle.

Composed in the 1950s, this duet represents the courtship of two bumblebees as they filit from flower to flower in a beautiful garden.

One of the earliest Kebyar pieces and now a classic, this work was composed by Gede Manik, the originator of Kebyar. The dancer acts out the various moods of youth.