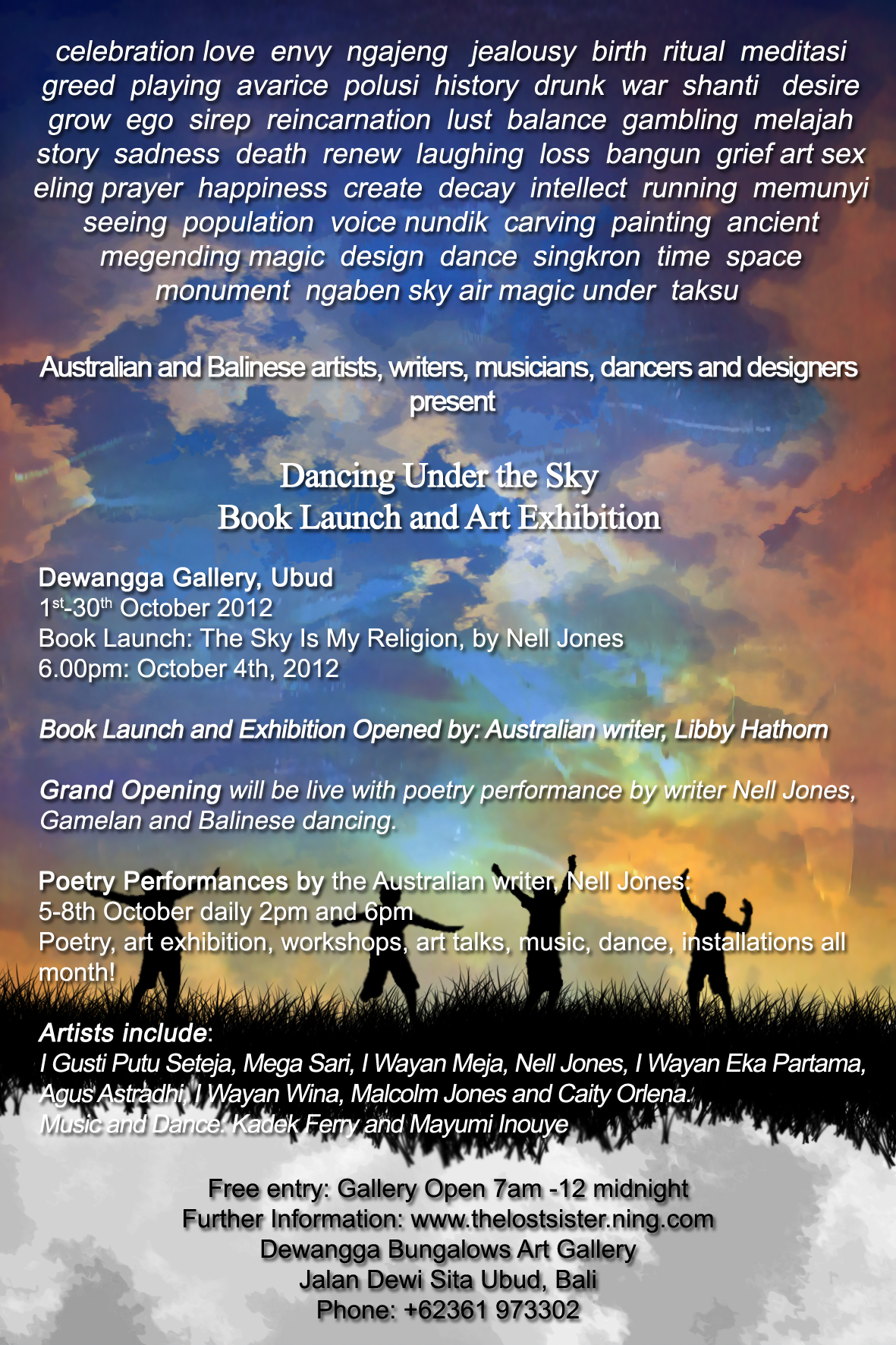 — from Press Release —
‘Dancing Under the Sky’
New Exhibition in Ubud, Bali with Australian and Balinese Artists

‘Dancing under the Sky’ invites you to ponder and experience through art, poetry, music, sculpture dance, and installation, a cultural exhibition at Dewangga Gallery, Ubud, Bali, unlike any other. The earth, and mankind’s experience of life is explored as a unique spiritual expression of the soul and the universe. Works based around these themes will be explored by artists from Bali and Australia, in this exclusive collaboration, as a month long a free event during October 2012, coinciding with the Ubud Writers Festival. Australian writer Nell Jones will launch her poetry volume, The Sky Is My Religion on October 4th with music and dance composed especially for the event.

The artworks exhibited aim to reflect the artists perspective of society, the universe, the earth, and mankind’s experience of life and the world that they find themselves, giving new insight into both cultures and into the lives of each respective artist. The exhibition focuses on the elements of the human spirit that provoke life, rhythm, mystery, love, loss and hope. This special exhibition reunites, I Wayan Meja, I Wayan Eka Partama and Nell Jones who came together in 2011 when they met in Ubud Bali, when Nell’s novel ‘The Lost Sister of Groningen’ was launched at the Ubud Writers and Readers Festival. Later in 2012, the three were reunited in Newcastle Australia, at the Newcastle Art Space, Newcastle Australia for the Building Bridges with Bali Project. Nell opened their painting exhibition at that venue with a poetry performance. As a result the artists have formed a lively interest in each other’s work and have decided to join their talents through Nell’s poetry, The Sky Is My Religion this year. Hailing from two uniquely different cultures, the artists have found great similarity in their expression of ideals, and invited other artists to collaborate with them in mounting this exhibition ‘Dancing under the Sky. As a result the idea of what makes us uniquely human under the sky we live in evolved. A new genre into the cultural space has emerged not only expressing itself, visually, but by giving a new direction for uniting all the arts.

Activities throughout the month include poetry performance with live original gamelan music written especially for the poetry performance by Kadek Ferry, dance, artist talks from both Balinese and Australian artists, workshops, music, and more.
The celebrated Australian writer, Libby Hathorn who herself is a guest writer of the Ubud Writers Festival this year will open this exhibition. MC, Desak Made Yuniantari, Program Officer for Indonesian Language at the Indonesian Australian Language Foundation.